DOZR is a construction tech company and the How It's Built series is about exploring the stories behind cool buildings and unique construction projects. We do not sell tickets to events at Raymond James stadium.

On average, 16.5 million people will watch an NFL football game. Over 37% of all Americans say that football is their favourite sport to watch. The NFL has grown a lot since its inception in 1920 and today 32 teams play to have the chance to win the yearly Super Bowl. When only two teams stand and that iconic game happens, it’s more than just the teams and players themselves who are on display. The iconic spaces and stadiums that house the games get just as much attention.

The 55th Super Bowl and the 51st Modern-Era National Football League Championship Game will be played at the Raymond James Multi-Purpose Stadium in Tampa Florida. But how and why was the iconic “Ray Jay” stadium built? 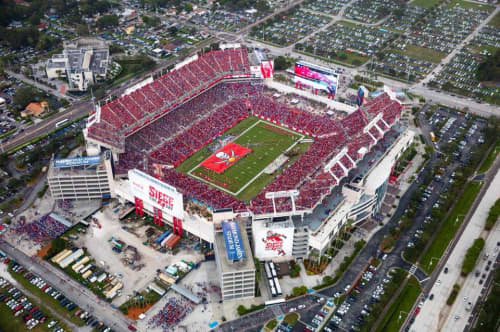 The Need for a New Stadium

In 1995 Malcolm Glazer bought the Tampa Bay Buccaneers and immediately declared that the team was in need of an adequate and updated stadium. Until then the team played and practised at the Tampa Stadium – also known as Houlihan’s Stadium. He threatened to move the team to another city unless a new stadium was built. Without Glazer making such huge threats and single-handedly pushing for a new stadium, Raymond James would never have been built.

Fundraising and financing the construction of a new stadium was perhaps the hardest part of the project. Tampa and Hillsborough County came together to propose a Community Investment Tax so that public money could help to fund it. Glazer promised to pay half the cost of construction if fans purchased at least 50,000 season tickets. The referendum for the tax passed. Unfortunately, season tickets cost between $190 – $2,500 USD per seat and sales were about 17,000 short. He pulled his funding. Ultimately the project was completely funded by public money.

The Tampa Bay Sports Authority owns and manages the stadium to this day but the Tampa Bay Buccaneers lease it as their home stadium.

Construction of the Raymond James Stadium

The project was massive. Ray Jay was built right by the old Tampa Stadium before they tore it down. For a majority of construction, fans could sit in the old stadium and watch as an innovative field was built right next to them. Wrecking balls and long-reach excavators were used for much of the process of demolishing the old stadium. The last bit of it was taken down with explosives.

Huber, Hunt & Nichols joined in with Metric Constructors of Tampa to lead the project. However, they were only two of the many big names behind the project. Over 60 general contractors participated in finishing the entire project. Some of the original contractors, such as MMC Contractors were brought back to complete updates later on. 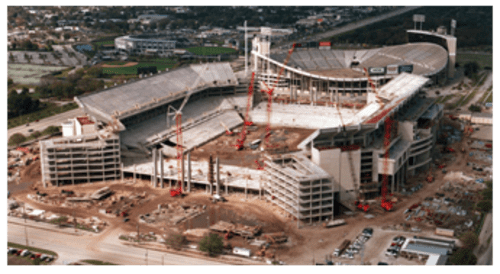 Something that makes Ray Jay stadium so unique is the “Buccaneer Cove” that lives at the northern end zone of the field. Designed after a 19th-century pirate village and complete with a 103 foot Pirate Ship, there is simply no other stadium out there like it. It cost $3 million to build this particular section of the stadium and the Pirate ship is an iconic tourist attraction for fans and first-time visitors alike.

The ship was designed by Bill Nassel who owns an Orlando company that specializes in building large iconic structures. He was the perfect man for the job as his company had completed work for AO Schwartz, Universal Studios and Planet Hollywood in Disney World.  It took 71 days to build it.

An article from 1998 in the Tampa Bay Business Journal states that at the time of construction, the Raymond James Stadium was set to be the most advanced and comfortable stadium in all of the National Football League. 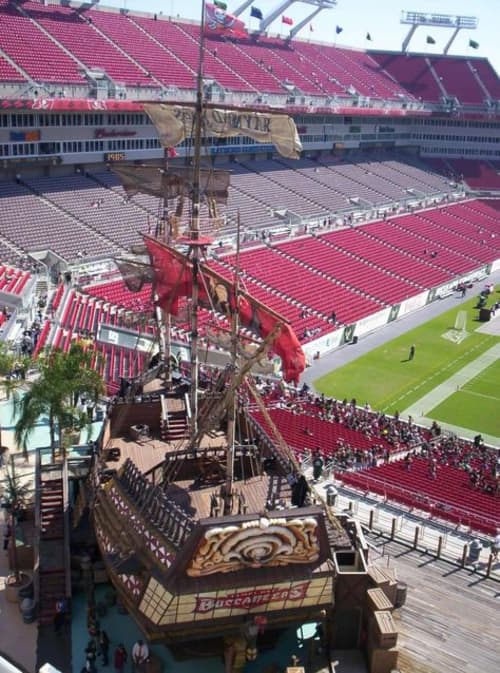 The typical construction process of a football stadium – or any type of outdoor stadium, really – is to first start with the seating bowl. Seats are usually situated on the inside of a ring-like stadium that houses shops, stalls, washrooms and other amenities. The foundation for the seats would need to be finished before working on the actual structure.

Once the foundation and seating is arranged, then the enclosure and stadium facade can begin. Infrastructure such as plumbing, AC and heating, garbage and trash disposal, wiring, etc can be put in place as this construction process happens.

Parking lots and outside landscaping usually happens before or during the process of finishing up the field. The field however always comes last. The grade and quality of the field itself is of utmost priority. Bringing in lifts, diggers and machines after working on the field doesn’t make sense so putting in the effort to make it a quality field was done after all other major construction was finished.

Grass for NFL stadiums is never grown in the stadium itself. To ensure quality and consistency it is usually grown by a sod company and then imported to the stadium in rolls and flats. This would have been the very last step in completing the stadium: bringing in and laying the sod.

Turf and grass is a big factor in the game of football. Turf that is too hard could affect the impact absorption when players hit the ground. Too soft sod can also be a problem. Aaron James has called out the soft turn at Raymond James Stadium, stating that the soft surface could be behind the multiple injuries he’s sustained while playing at the stadium. The NFL does take precautions to make sure that all turf – synthetic and real – meets a set of standards to ensure that fields are meeting quality standards for the sport.

Ray Jay stadium doesn’t have synthetic grass. It uses Tifway 419 Bermuda Grass. The grass is not grown in the stadium but is shipped in is flats of sod and installed prior to games. Grass is grown specifically for the Super Bowl every year and is immediately removed after the game is done. The grass is usually repurposed in nurseries or surrounding landscape projects. 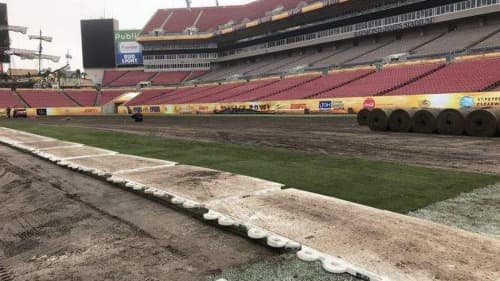 It cost $168.5 million USD to build the stadium. During construction, the project was known as the Tampa Community Stadium. Naming rights were bought by St. Petersburg-based Raymond James Financial. They purchased the rights in June of 1998 for $32.5 million. Throughout the years, the rights have been extended and Raymond James will stick as the name-sake of the stadium until at least 2028. Raymond James Stadium can seat 65,618 people but can expand to 75,000 with additional temporary seating.

While it was built to be a football field, Raymond James Stadium has hosted a number of events. WrestleMania, soccer games, concerts and music festivals have all taken place in this open air space. In February of 2021, the Raymond James Stadium will host the 55th Super Bowl Sunday between the Kansas City Chiefs and the Tampa Bay Buccaneers.