The Hoover Dam is one of the largest man-made structures in the world. At the time of its construction in the 1930’s, it was most definitely a unicorn of a project. There was no other project out there like it. Today, the Hoover Dam provides yearly electricity to over 1.3 million people across Arizona, southern Nevada, and California. 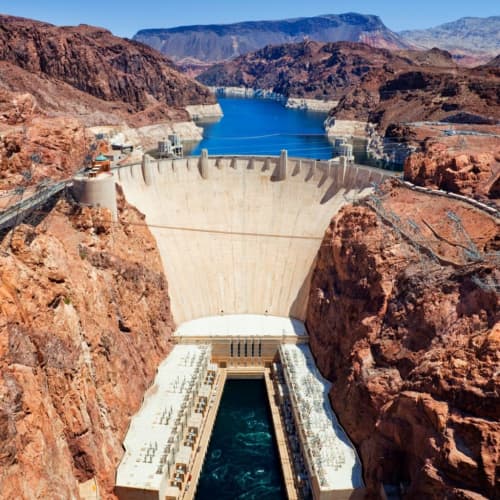 Why Was the Hoover Dam Built?

The Hoover Dam was built for three main reasons: flood control, to provide irrigation water, and to produce hydroelectric power. Flood control was the main reason the Bureau of Reclamation decided to take on the projects. Today, tourism is another bonus for the dam. Over 7 million people visit the dam every year.

Every year, spring melt from the Rocky Mountain would flood farms along the Colorado River. The dam problem solved this issue while also addressing the need for power. Damming the river created more space for farmland as well as a water basin to use for irrigation. 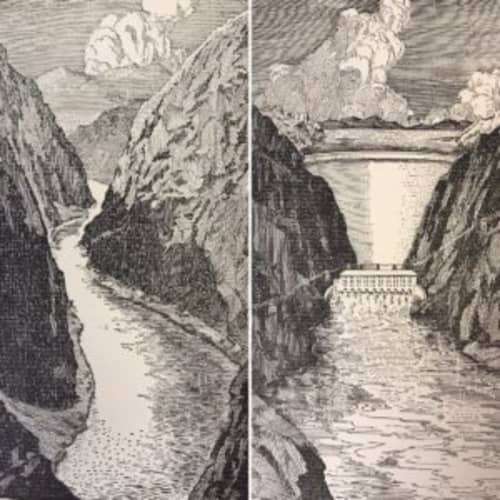 Plans for the dam took over 30 years of research, lobbying, organization and design. Arthur Powell Davis who was an engineer at the Bureau of Reclamation conceptualized the dam back in 1902. The beginning of the 20th century marked a major time of change for the river. The Colorado River, before this time, was an unchecked flow of water that moved amongst high canon walls at the mercy of rainfall and spring melt from the towering Rocky Mountains.

Between 1910 and 1970, numerous dams were built that ultimately reshaped the river, creating a complex flow of water reservoirs and diversions.

The actual construction of the dam took place between 1931 to 1936 – right in the midst of the Great Depression. It was overseen by Chief Engineer Frank Crow.

With so many large and mega construction companies out in the world today, it may be hard to believe that in the 1930s there was no real company big enough to take on the project of building the Hoover Dam. Because of this, Utah Construction Company started working with other construction companies in the area to build a consortium of construction firms until they, together, were big enough to bid on this project. At first, they worked with Morrison-Knudsen (now Washington Group International) to join. By the end of the talks, there were six companies had come together for the project. Together, they made up the Six Companies Inc.

The six companies in question were Utah Construction, Morrison-Knudsen, Kaiser, Bechtel, Pacific Bridge, and MacDonald&Kahn. Six Companies Inc was created in February of 1931 and went on to complete a few other large projects. 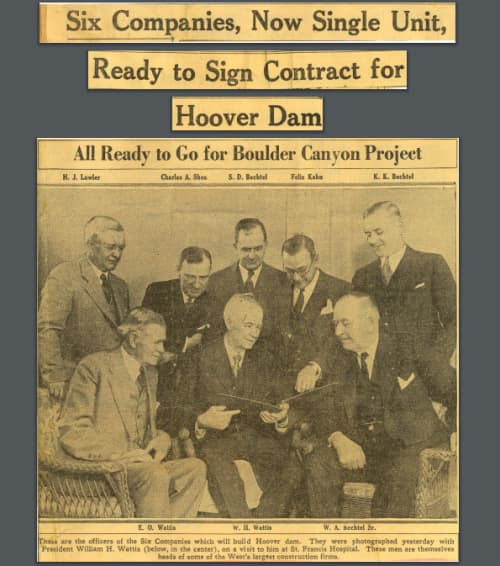 Bidding on The Hoover Dam

The Six Companies Inc bid the equivalent of $674 million USD in today’s money to win the project. Their bid was almost $5 million less than the next bid, making them a clear choice for the project.

Construction of the Hoover Dam

After surveying and choosing Black Canyon as the spot to build the dam, explosives were used to blast away the sides of the canyon for construction. 4 diversion tunnels were built to redirect the water while the dam was built. Dredging the bottom of the canyon, blasting and removing debris, and digging to build the foundation took just over a year.

Because the dam is in the middle of nowhere (or it was in the 1930s) much of the labor was done by hand. Moving debris, drilling holes for explosives, and leveling the foundation required constant work by laborers.

Giant concrete blocks were fitted into place and used to build the dam itself. The whole process – building the dam as well as the powerhouse and generators – cost $165 million USD.

The Construction Workers of the Hoover Dam

Over 5,000 workers were employed to build the dam. The lowest wage was 50 cents an hour, and the highest was $1.25. The average for all of the workers at the dam was about 62.5 cents an hour.

Working the dam construction meant long days and dangerous work, Temperatures could top 120 degrees during the day (just over 48 degrees Celsius) in the summer and drop well below freezing in the winter. The blasting and explosives used during construction as well as the digging and building in desert sand created terrible air quality on site.

Workers actually went on strike for a portion of the summer in 1961. Their demands included ice water, flush toilets, and that the Six Companies follow mining laws since they were blasting through bedrock and digging diversion tunnels at the time.

Despite all these challenges, employment at the dam was a sought-after gig. Some men and their families moved up toward Nevada in 1929 hoping to reserve employment. The dam was built right in the middle of the Great Depression so the idea of long-term employment – no matter how dangerous – was appealing.

Entire families lived in makeshift homes and quickly-build towns in the middle of nowhere. Boulder City, Nevada was constructed to house all the contractors working the job and their families. 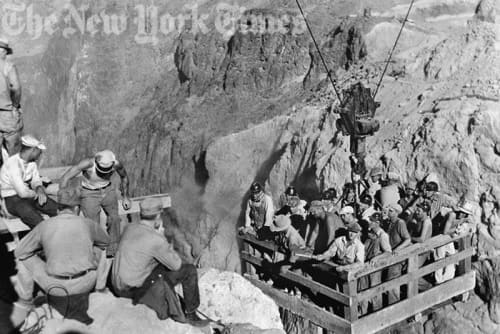 Despite what the stories say, no bodies were buried within the concrete of the dam. Officially, 96 people died during construction. They say “officially” because these numbers include mainly the on-site and construction deaths. Struck by, drowning, falling debris, blasting and other construction-related deaths are included in this number. Some sources cite up to 114 deaths which include those who drowned or fell while surveying the land before construction or anyone else who died from heart problems, heat-related illnesses, dehydration, issues caused by air quality on-site or other fatalities that aren’t perhaps “directly” caused from the project itself.

The Hoover Dam is an iconic piece of American history and its landscape. It’s important to remember the men and families who spent years working to make it possible.

The name of the Hoover Dam changed a few times during its first few decades. Originally called the Boulder Dam in 1933, a resolution from the United States Congress renamed the dam after President Herbert Hoover in 1947.

There are 582 miles of cooling pipe in the am to control the temperature of the concrete and prevalent cracks.

Over 2,480,000 square meters of concrete were used to build the dam – enough concrete to build a two-lane highway from San Francisco to New York City.

Today, the future of the Hoover Dam remains bright. Adaptation from an electric plant to an electric power plant and storage plant is coming to the dam’s future. As water shortages and droughts threaten the production of the dam, using the dam as a type of super-battery could help keep the dam relevant as times change.

The Hoover Dam was a game-changing construction project that still stands as a beacon of innovation and infrastructure design.

Up Next...
5 minute read
Building the Miami Freedom Tower

Contact Us
Equipment Rentals
DOZR.com Rental Search
Snow Removal Rentals
Products for Rental Companies
WebStores
DOZR Marketplace
Resources
For Contractors
For Rental Partners
DOZR Hub Blog
Company
About DOZR
Press
Careers
DOZR Account
Sign In/Sign Out
WebStores
For Rental Companies
Create your own WebStore and enable online, touch-free bookings with your customers.
GET STARTED →
DOZR Marketplace
For Rental Companies
Listing equipment on DOZR.com gives you access to hundreds of thousands of contractors searching for their next equipment rental.
GET STARTED →
DOZR.com Rental Search
For Rental Customers
Renting equipment has never been easier. Search and compare thousands of rentals in your area and book online in a snap.
SEARCH NOW →
Follow Us