Construction is often the story of building or restoring. Whether it’s renovating an old house or constructing a new highway, the construction industry is constantly molding and shaping the world around us. What’s so interesting about the Venetian Pool in Florida is that the pool was not a project in and among itself. Instead, it was the byproduct of another construction project altogether.

Many people say that the Venetian Pool is located in Miami, Florida. Looking on a map, this makes sense. But the pool itself is actually located in a small sub-city region within Miami called Coral Gables. 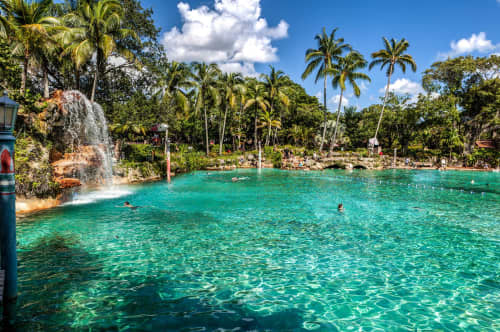 The History of Coral Gables

Coral Gables was built in the 1920s by a real estate developer and poet named George Merrick. Merrick, who was born in a suburb of Pittsburgh, grew up in Miami. He studied law and was appointed as the county commissioner in District 1 in 1915 by the governor of Florida. He was responsible for the building of many roads in Florida, including the South Dixie Highway (US Highway 1), the Tamiami Trail in the Everglades (which is currently a part of the Everglades Restoration Project) and the Miami Canal Highway.

The Building of Coral Gables

Merricks father left him 3,000 acres of citrus groves and forest land in Florida. Much of the state – at the time – was undeveloped swampland. In 1922, he began designing a new town in this land under his own vision. He wanted to build a Mediterranean oasis in the state of Florida, complete with landscaped lawns, country clubs and only the finest care put into every detail.

Merrick had written some poems, and one described what his vision was for the city:

“I dream of the home of the Fairies and Fays,
on the isles of the calm southern sky,
Of the fanciful turrets and towers ablaze
In the flood of the rays from on high…”

It was one of the first planned communities to be built in America. In total, he spent over $20 million dollars building Coral Gables, with total development dollars surpassing $100 million. One of the most noteworthy buildings in Coral Gables was the Biltmore Hotel. It is still an iconic landmark in the community.

Unfortunately, a hurricane in September 1926 devastated the little town. The Great Depression followed right after and further development of the city was put on hold. Merrick fell into debt and ended up leaving the Coral Gables Commission. Despite this, Coral Gables did continue to thrive and has since become a community space for Florida residents – still recognized for its Mediterranean feel.

Today, about 42,000 people live in the community of Coral Gables. 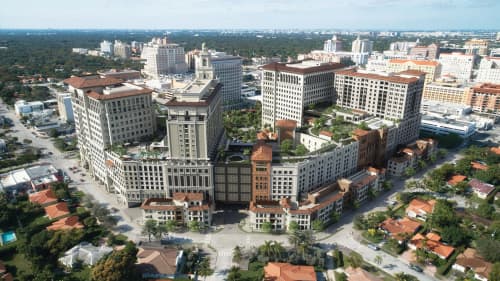 The Mediterranean Style of Coral Gables

Because Merricks vision was to create a community under the Mediterranean Revival style, many of the buildings were constructed out of limestone. Nearby quarries were dug to harvest the stone. By the time the community was built, the neighborhood was left with a massive hole in the ground. 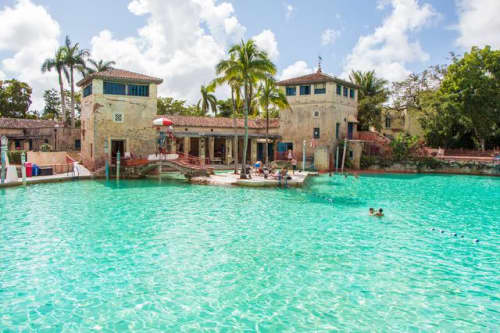 The Venetian Pool in Coral Gables

The current Venetian Pool is actually the byproduct of the quarry created to build the city. The quarry was repurposed into a pool in order to provide a local hangout. It was also meant to support the Mediterranean vibe of the community.

Merrick had designed a “Venetian Casino” to make use of the pool and quarry in 1924. It became a popular destination for celebrities and high-profile visitors looking to host an event in a cool space outside of Miami City. 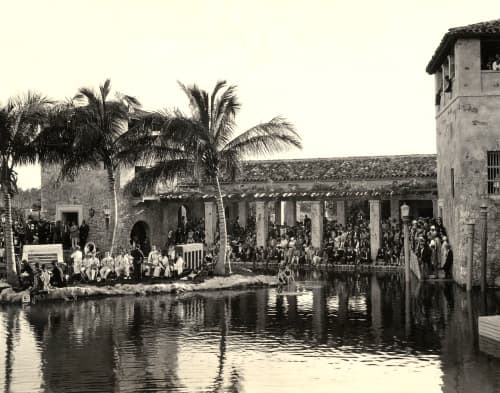 The Role Of The Venetian Pool in Building The Florida South

As more noteworthy people began traveling to the Florida South to experience this unique pool, the spotlight began to shine more brightly on Florida. For a long time the Florida South was often looked at as an uninhabitable swampland that no one would want to visit or live in.

With the creation of Coral Gables and the experience that people had at the Venetian Pool, the idea of moving to South Florida began to be much more appealing. This paired perfectly with Merrick’s work in establishing roads and traveling routes within the area.

Cool Facts About the Venetian Pool

Although the general space of the pool was already created from the city’s construction, making the pool involved building an event space and the two waterfalls that are now key features of the pool.

The water to fill the 820,000 gallon pool is pumped in from a natural spring and the pool is drained and refilled every 24 hours. You may think that this is environmentally unfriendly but it’s actually the opposite. The water is chlorinated as a part-per-million that is less than tap water. At the end of every day, the water is simply returned to the spring where the limestone and sand acts as a natural filter.

Not only does this keep the water fresh but it adds another uniqueness to the pool that simply can’t be found anywhere else.

Today, the Venetian pool continues to act as a community hub for many events and free activities. Swimming lessons, family swims, weddings and photoshoots take place every year at this beautiful space.

At a higher level, this project is an embodiment of the imagination and creativity that blooms from this industry. All projects start off as a hole in the ground.

The Venetian Pool was an outcome of another project and has helped to shape South Florida into the place it is today. You may not think that a construction project could have such an impact on a community but if we’ve learned anything from exploring in the How It’s Built series, it’s that every project out there has had an impact bigger than itself.