7 Results for 1300 Lbs Wheeled Skid Steers Rentals in Toronto, ON.

What is a Skid Steer? 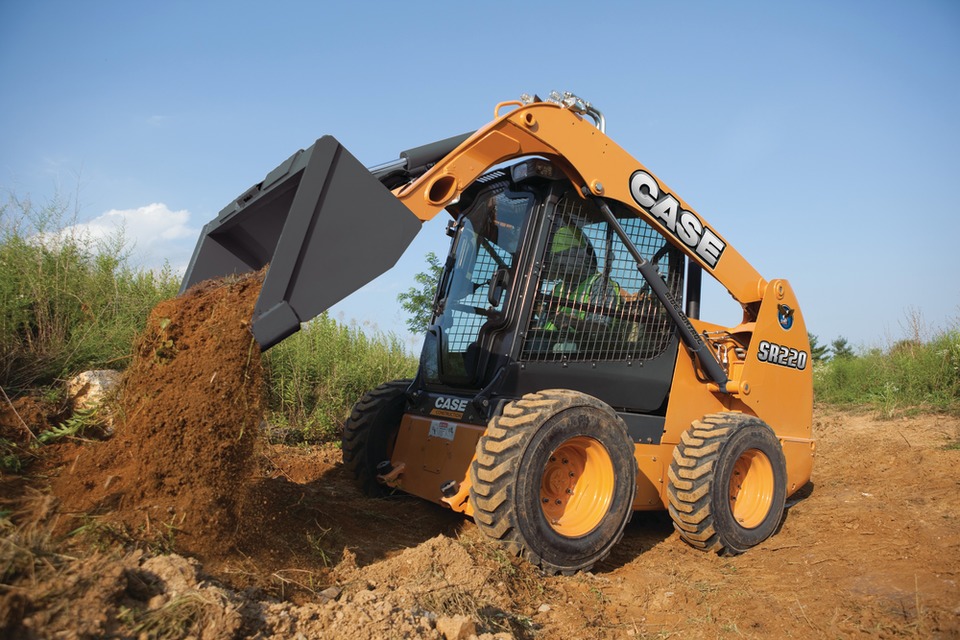 Skid steers are available for rent in different sizes. A skid steer is capable of many different jobs including dozing, grading, digging, lifting and transporting materials around site.

The small size and maneuverability makes a skid steer an efficient tool for projects in smaller work areas with limited space. Skid steers are a multi-purpose, multi-terrain piece of equipment that help to keep a project moving.

The skid steer loader has dual hydraulic arms which give the skid steer great lifting capacity. These small but mighty machines are capable of lifting anywhere from 1,250 lbs to 2,700 lbs. They are best used for lifting and moving heavy material. Skid steers are a handy tool for construction sites, landscaping projects and excavation jobs. 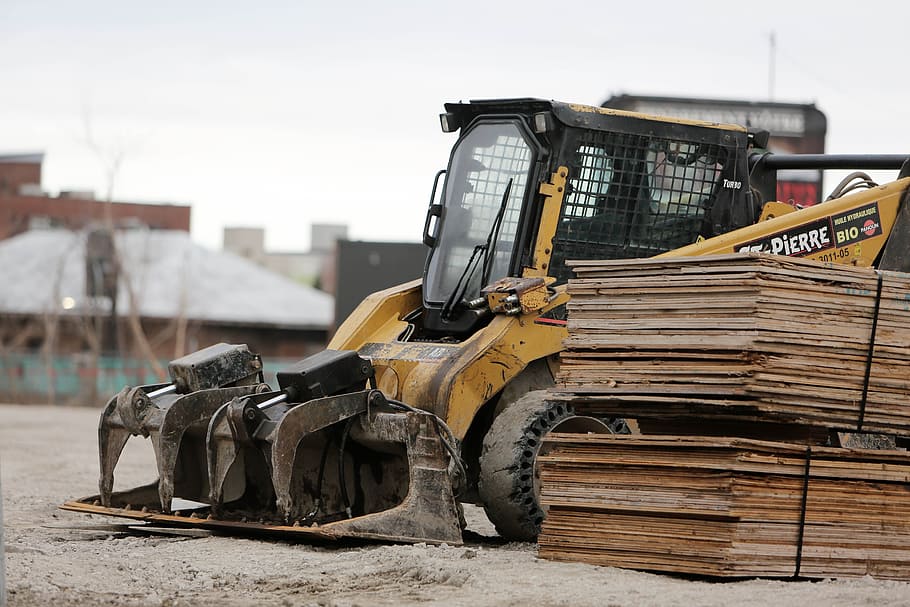 The different kinds of attachments for skid steers help to diversify the equipment. For spring, summer, winter, or fall, the skid steer can help increase productivity and add a level of efficiency in all kinds of project types.

Moving material is the main job of a skid steer. Smooth buckets make it easy to move soil or other materials. It is faster and easier than doing so by hand and adds a level of efficiency to any job.

When hand shoveling would take too long but the job is too small for a compact excavator, then this attachment may work best for you. Sawtooth bucket attachments for skid steers are great for digging in rocky landscapes, hard packed soil or when digging right into the ground.

Available in many shapes and sizes, grapplers feature retractable claws for gripping and grabbing. Mainly used in construction sites for moving larger objects and debris, farmers can also make use of this attachment for pulling stumps and carrying logs.

Steel rotating augers make plowing through deep packed snow easy. Skid steers can be used to clear heavy snow when paired with a snowblower attachment and can be great for narrow spaces like sidewalks or between buildings.

A dozer blade attachment can be added to a skid steer to help with landscape grading and pushing heavy loads. If the job is too small for a dozer then the skid steer can fill that gap.

While these are the most popular attachments, the skid steer can also be fitted with concrete breakers, auger drills, tillers and mowers. It would be more difficult to find a job that the skid steer can’t help with than one that it can.

Bobcat is the namesake of skid steers but many other companies now make skid steers so there are options out there. Unlike other types of heavy equipment skid steers are requested for their size over a specific model type. Small, medium or large skid steers are chosen depending on what best fits a project and companies usually make all three types.

Bobcat is a company often associated with classic American entrepreneurship. Edward Gideon “E.G.” Melroe had founded the Melroe Manufacturing Company in North Dakota in 1947. He died in 1955 and his sons took over the family business. They eventually joined up with the Keller brothers - inventors from Western Minnesota - and proceeded to grow the business towards machine manufacturing.

The Keller brothers would go on to invent the first ever skid steer in the form of a three-wheeled loader. The machine was specifically made for turkey farmers. They called it the Keller Loader. Melroe Manufacturing bought the rights to the machine in 1958 and both the Kellers and the Melroe’s began mass production of the machine.

The name “bobcat” came in 1963 when the M444 Melroe Bobcat was first released. The name comes from the quick, agile and tough qualities of the machine - it reflected the abilities of a bobcat to a T.

Today, the term “bobcat” is synonymous with the term skid steer.

Caterpillar is a company that first began with a man named Benjamin Holt inventing the continual tracked system. Today CAT is a multinational company that is one of the most recognized names in heavy equipment.

CAT jumped on the bandwagon started by the Keller brothers and developed their own version of the skid steer. With 65 - 75 hp and operating weights up to 10,000 lbs, CAT skid steers are the versatile machine of choice on many construction and landscaping sites.

John Deere was a Mid-Western blacksmith known for the invention of the steel plow. Today John Deere is a global brand name well known for its tractors, backhoes, excavators, loaders and skid steers. With horsepower that outperforms Caterpillar, the John Deere wheeled and tracked skid steers have up to 100 hp engines and have a weight capacity up to 3,600 lbs. These mighty machines add another dimension to the versatility to the John Deere brand.

Well known for their powerful and long lasting equipment, CASE now produces everything from dozers to excavators. CASE skid steers have been developed since 1969 and they celebrated their 50th year of skid steers in 2019.

Skid steers can be fitted with a continual track system or with wheels. Tracked skid steers are better suited for certain jobs and terrains than wheeled skid steers and vice versa.

When to use a wheeled skid steer

Wheels work best for even ground. When moving over hard terrain or finished concrete, wheels are much better fitted than a track. Wheeled skid steers also cost less to maintain. Wheels in general cost less money and they are more fuel efficient. They generally require less maintenance and do not break as easily. It is much easier to clean the undercarriage of a wheeled skid steer than a tracked one meaning that preventative care is easier to maintain.

When to use a tracked skid steer

A tracked skid steer is better for challenging terrain types. Snow, mud and sand are easy to soar over with the powerful track. They were built to master uneven terrain and slopes as they disperse their weight across the tracks instead of isolating it to four wheels. If the job is going to be muddy and messy by nature, choosing a tracked skid steer will help keep efficiency and productivity up since it won’t affect the effectiveness of the equipment. 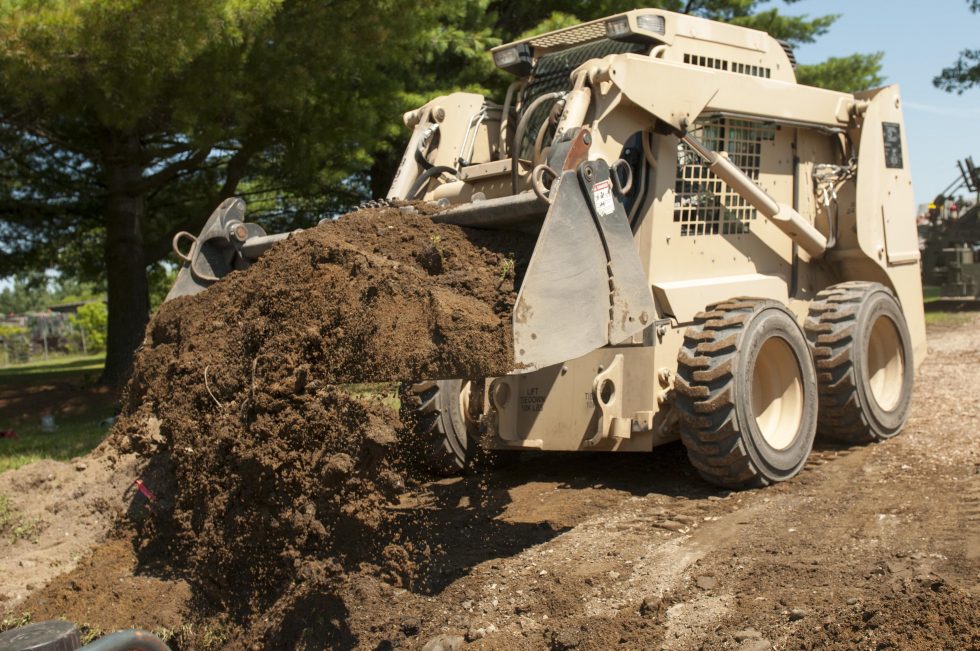 There are different safety hazards associated with skid steers. 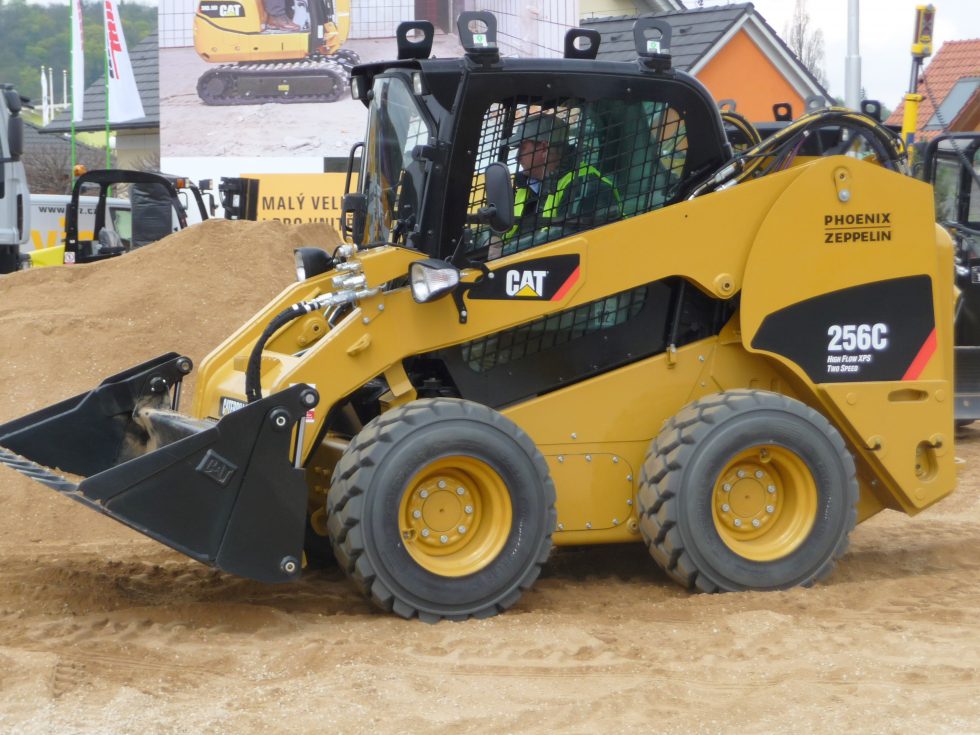 Struck-by hazards are a threat for those working around skid steers
Skid steers are often used in high traffic areas. The quick nature of skid steers make fast reversing and quick turns dangerous if the driver does not take the time to survey their work area. Checking blind spots and using a spotter can help keep those working around a skid steer safe. Being attentive can prevent incidents like this.

Crushed-by hazards are another big safety hazard of skid steers. This can happen either by crushing another worker with the skid steer or by the skid steer operator themselves being crushed. Always be careful of the position of the lift-arm and frame to avoid being trapped or crushed. Never work under a raised skid steer bucket.

Be aware of where the skid steer is being operated. The cage around it should protect the driver from any falling objects or debris but always put safety first.

Skid steers are often used for lifting heavy loads. Loads can shift and move as it is being transported and could cause a skid steer to roll. It is also possible to roll sideways when moving over uneven ground or steep grades.

The History of the Skid Steer

Skid steer loaders are synonymous with the brand Bobcat but they also have a few other names. They are also known as compact wheel loaders, compact track loaders, or skid steer loaders. Skid steers are available with both tracks and wheels.

The very first skid steer was invented in 1957. It started off as a three-wheeled loader invented by Louis and Cyril Keller, two brothers from Rothsay, Minnesota. Louis and Cyril were approached by a local turkey farmer who asked the brothers to invent something to help him move around his farm. The three-wheeled machine was the outcome. They called it the Keller Loader.

After this initial invention word of the three wheeled skid steers spread and the demand for the Keller Loader grew. Melroe Manufacturing bought the rights to the machine in 1958 and the brothers worked in development for the company to mass produce their invention.

The “bobcat” name apparently become associated with the machine in 1963 when the M444 Melroe Bobcat was first released. The “tough, quick and agile” definition of a bobcat fit the equipment perfectly and a name was born.

Other brand names such as CASE, CAT, John Deer, Kubota and Komatsu have released their own version of the skid steer.

Which skid steer is the best?

In 2018 Bobcat Company said that the S650 was its most popular model with a higher lift and dump height being popular as well as the appeal of a 74 hp engine. However, like with any kind of heavy equipment the “best” skid steer will depend on the nature of the project. Knowing what the expectation is for what the equipment can do and the budget for renting or buying a skid steer it is possible to pick the “best” skid steer for you.

Can a skid steer load a dump truck?

The ability of a skid steer to load a dump truck will depend on the size of the skid steer as well as the height of the dump truck. Skid steers are primarily used to move material and heavy loads. A loader may be a better choice for loading material into a dump truck.

Choosing the right equipment for the job can help increase the efficiency of a project. Instead of using one piece of equipment that can kind of do everything, renting a few pieces of specific equipment types can help make a project more productive. Single day equipment rentals are available through DOZR.

What is the difference between a skid steer and a Bobcat?

A skid steer is a kind of equipment and a Bobcat is a brand of skid steer. However the very first skid steer created was called a “bobcat”. It is the usual go-to brand for a skid steer.

Can I rent a skid steer?

Yes, skid steers can be rented. Search for skid steers on DOZR to see the variety of sizes which are available. DOZR works to bring heavy equipment within reach from anyone, anywhere, anytime and offers a variety of skid steers for rent for any kind of project - big or small. Rent the perfect sized skid steer loader for your job to keep a project as efficient as possible.

How long can I rent a skid steer for?

From daily to long-term rentals, an skid steer can be rented for as long as it is needed. Same-day delivery (when applicable) is available on DOZR and there are different price options for daily, weekly or monthly skid steer rentals.

How much does it cost to rent a skid steer?

The rental cost of an skid steer varies depending on how long the rental is for, what size of skid steer you want and the supplier of the skid steer. ON DOZR every price across the industry - from high to low, long-term to short-term - is available with one search.

Start a new search on DOZR.