New and impressive buildings are constructed for special events all the time. Every four years new Olympic stadiums are built to impress global spectators.  Local festivals have caused the creation of permanent fairgrounds, like with the Calgary Stampede. In Seattle, Washington, there is an iconic building that was created for a special event as well. It may be argued that it is one of the most iconic event-built buildings because it has grown into a symbol recognized within cartoons, maps, tv shows, and movies. This building is, of course, the Seattle Space Needle. 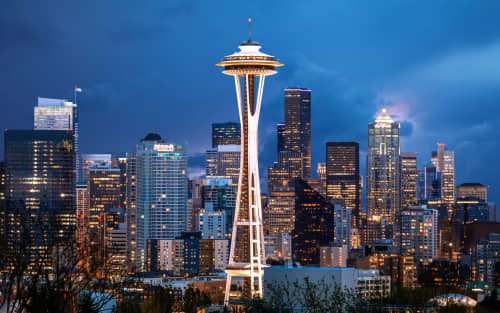 The Seattle Space Needle: An Overview

Construction of the Space Needle began in 1961. It only took 400 days to build the tower. Because of this, the tower is sometimes referred to as the “400-Day Wonder”. Reaching 605 feet into the sky, the Space Needle has become an iconic building recognized against the mountainous backdrop of Washington State.

The United States was in the midst of a “Space Race” during the 50s and 60s. Seattle had already been recognized as an “aerospace city” with Boeing opening up an aeroplane assembly line within city limits. As the Seattle Mayor began petitioning to raise funds to host a World Fair in his city, the idea to use the event to help market America and Seattle as a leader in the race to the stars took hold. When the city secured the 1962 World Fair, a theme of space, science and technology was decided. They called it, ‘Century 21 Exposition’.

With such a progressive theme and goal for such a massive event, specialty venues and buildings would be needed to help convince visitors of this idea that Seattle – and the USA – were leading the charge in space and science innovation. A number of businessmen involved in the World Fair committee set off to build the most awe-inspiring world fair in history. 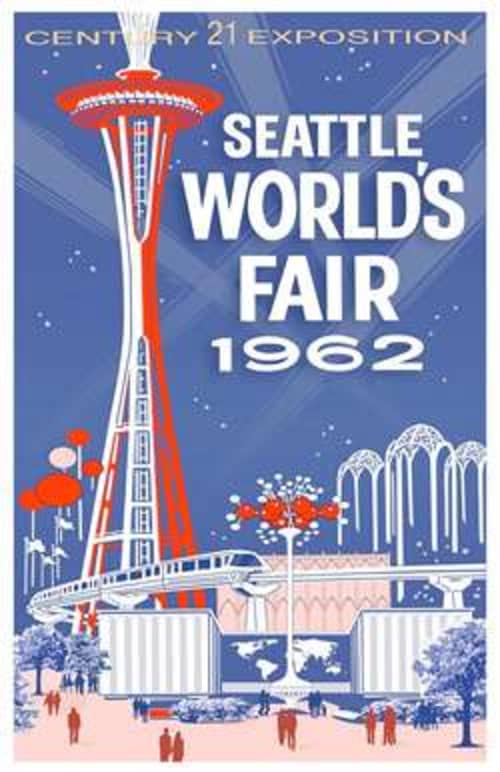 The Concept of the Space Needle

Edward E Charlson was a Seattle businessman who was heavily involved in the World Fair Commission. He was heads down planning for the 1962 World’s Fair in Seattle when he visited Stuttgart, Germany in 1959. On his trip, he was intrigued by a tower he saw with an observation deck at the top. He was in the observation deck restaurant having dinner when he was struck by an idea: Wouldn’t it be the perfect representation of space and innovation to offer the same type of experience at the World Fair in Seattle?

Charlson worked with John Graham Jr, another Seattle businessman involved in the world fair, to brainstorm ideas for the tower. A balloon-type deck and a UFO spaceship design were among the ideas sketched out. It wasn’t until they began working with Seattle architect Victor Steinbrueck that the shape of the Needle as we know it was born.

Steinbrueck was inspired by a statue of a dancing woman by local Seattle artist David Lemmon to create the wispy-like form of the tower. It was finally designed to represent a spaceship on legs. A copy of the inspiring statue, titled Feminine One, stands outside the tower today. 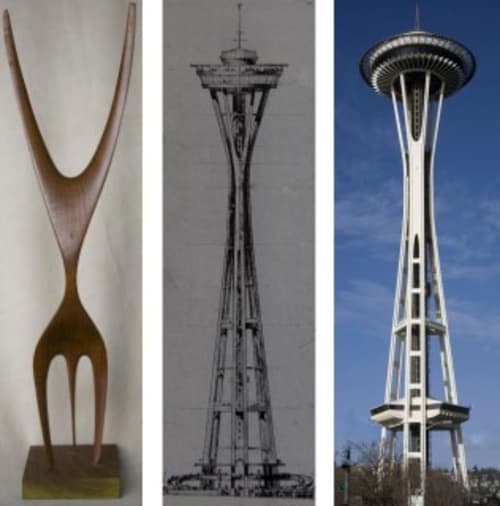 Construction of the Seattle Space Needle

Once the design was finished, the team began to seek out a location for the tower. A 120 X 120 ft lot near the heart of Seattle was up for grabs. A group of private investors purchased the lot for $75,000 USD in 1961. Almost immediately, a contracting company named Howard S. Wright Construction took on the task of digging and filling the foundation for the new iconic and futuristic tower.

Howard S. Wright was a cabinet maker from Port Townsend, Washington. He founded his construction company in 1885.  He moved his family to Everette and then Seattle in 1929 – bringing the company along with them both times. By the time they settled in Seattle, a few generations of Wright’s had already been working with the company. By 1940, Howard S. Wright Construction was a well known and respected company within Seattle.

Howard S. Wright Construction was the main builder for many projects for the 1962 World Fair. That being said it was the Seattle Space Needle project which established the company as an innovative builder. They were later hired to build the Columbia Tower as well as other skyscrapers in downtown Seattle.

The company was sold to the Dallas branch of Balfour Beatty Construction in 2011. 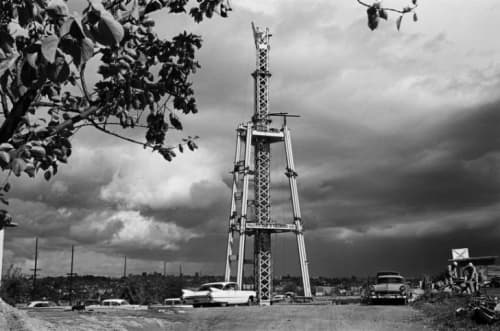 The foundation of the space needle was completed between April and May of 1961. A hole measuring 30 feet deep and 120 feet wide was dug to help support the tower above. It took 467 cement trucks one full day to fill the foundation. This project was the longest continuous concrete pour attempt on the west coast at the time.

Scientists today argue that it’s unlikely that it would actually fall in an earthquake – unless it was a really big one. The tower withstood a 6.5 magnitude earthquake in 1965. The only thing that broke was a bottle of champagne. 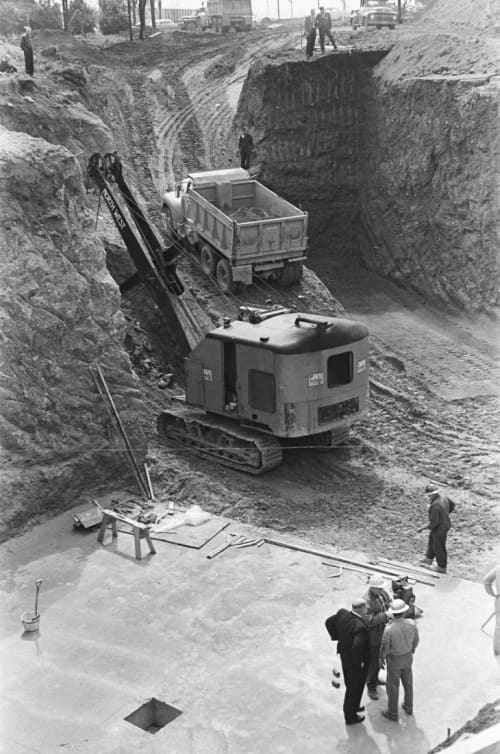 Once the foundation was secured, construction crews worked 24 hours a day to ensure that the tower was complete in time for the World Fair. The tower itself was made out of steel – different from the concrete moulding needed to build the CN Tower in Toronto. 72 30-foot long bolts connect the tower to the foundation itself. The observation deck sat upon a motor that would slowly rotate, giving viewers a 360-degree view of the Seattle skyline and Washington Mountains.

In line with the futuristic theme of the fair, the tower was painted select colours to help it fit with the theme. These colours included Astronaut White, Orbital Olive, Re-Entry Red and Galaxy Gold.

It took 8 months and a total of $4.5 million for the USA to complete the tower. The project timeline was successful and the tower opened on April 21, 1962, in time for Seattle’s World Fair. 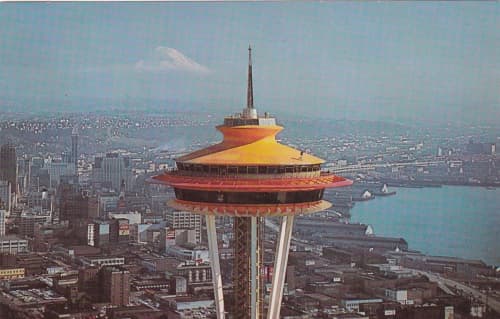 During the expo, the tower hosted over 2.65 million visitors. Prince Philip, Elvis Presley and Neil Armstrong were among the many famous visitors who came just to see the new and impressive structure. A gas torch was featured at the top of the tower and would light up every night throughout the expo as a visual representation of innovation, science and the never-ending possibilities of the future.

The Space Needle After the Expo

The Space Needle was just one of the many buildings that remained after the expo to help Seattle’s economy thrive in the next few decades. A radio broadcast station was built in the tower in 1963. People kept on visiting the tower, seeking its spectacular views and one-of-a-kind West Coast experience. The tower continued to integrate itself into the Seattle skyline until it was so ingrained it became its most iconic structure.

A Pavillion, retail store, and restaurant were added during the $20 million restoration project in 2000. Outdoor lighting and an improved observation deck helped to improve the experience for guests and visitors. The latest revitalization project took place in 2017 when an all-glass observation deck and glass floor were installed in the observation deck. Sustainability improvements were also added to the tower which has since been awarded with LEED Silver certification.

Over 60 million people have visited the Space Needle since opening day in 1962. 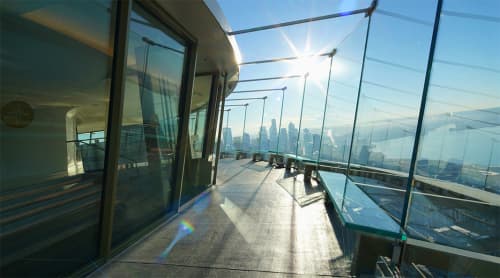 An Iconic Structure To Last The Ages

The inspiration that appears to come from nothing is always astonishing. From a dinner in Germany to a statue in Seattle, who knows where ideas will arise. The Space Needle is just one example of the structures that are built for a specific purpose but last for ages. The lasting impact is invaluable, too. The world fair and the tower itself helped to secure the economic future of a now booming city. Looking at the tower today, it’s clear why Edward Charlson, John Graham Jr. and Victor Steinbrueck settled on this design to represent the innovative future of America.