Many buildings have been designed and built in the name of love. From the Ashton Memorial in England to Coral Castle in Florida, love – or more notably loss – have inspired grand architectural designs and wonder. There is no building built for a loved one, however, that can even come close to the Taj Mahal. 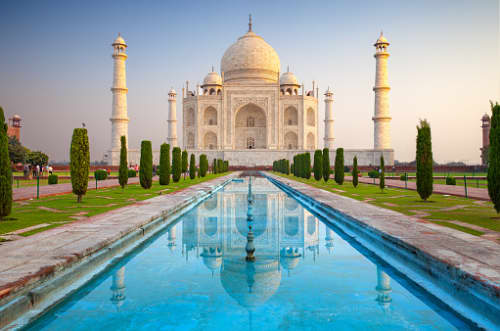 The Taj Mahal is located in Agra, India on a 17 hectare (42 acre) plot of land on the bank of the Yamuna River. It was built by Mugal Emperor Shah Jahan as a mausoleum for his favourite wife Mumtaz Mahal. She died on June 17, 1631, giving birth to her 14th child and he commissioned the project that same year.

Although this death happened almost 400 years ago, reports are still around of how inconsolable the Emperor was after the death of his favourite wife. He mourned in seclusion for a year after her death, appearing later with totally white hair, a hunched back and worn face. Some historical reports claim that the Emperor almost abdicated the throne he was so overcome with grief. 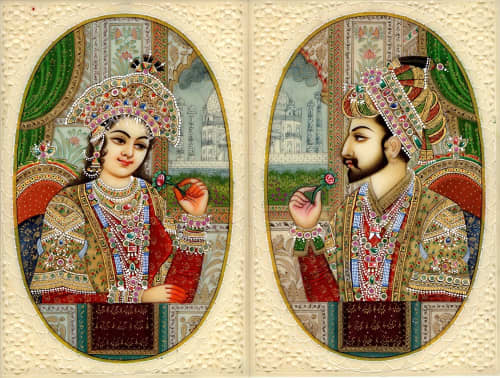 It was this grief that inspired him to create the most perfect resting place for his wife. He was inspired to build a “paradise” for her to rest for all of eternity. Today, The Taj Mahal is still recognized as one of the most perfect buildings in the world. It is more definitely regarded as the greatest accomplishment in the history of Indo-Islamic architecture.

When Emperor Shah Jahan died, his body was laid to rest right next to his wife at the Taj Mahal.

How the Location of the Taj Mahal was Chosen

No one really knows why the Taj Mahal was built where it was. Sitting next to the Yamuna River, this plot of land actually belonged to the grandson of Jahan. He would not take it as a gift, however, and bought the land before building the mausoleum. Beliefs at the time stopped him from building a tomb on “borrowed” land.

There are two main speculations about the location of the tomb. The first is its proximity to the river. The Yamuna River is a tributary to the Ganges which is a sacred river in India. The second is the belief that the land would be a quiet resting place for his deceased wife. Many nobles owned land in this area of India at the time so it would have been relatively peaceful and quiet – two qualities often associated with paradise. There was no way Emperor Jahan could have known that 400 years later over 7 million people would visit the tomb every year. 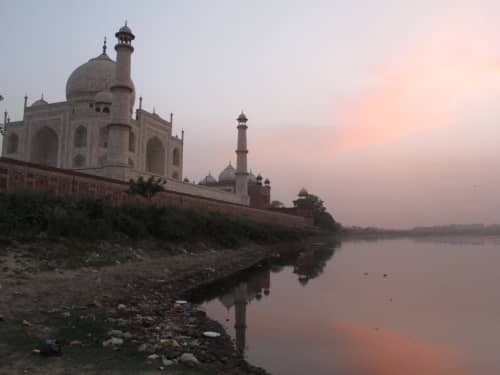 Construction of the Taj Mahal – The Fast Facts

Construction of the Taj Mahal began in 1632 and lasted until 1648. These years, however, only include the construction of the actual mausoleum. Another five years were spent building the gardens, the enclosure, the main gate, guest house and courtyards.

Specifics about costs and labour differ depending on where you look. With buildings as old as this, it’s hard to know exactly what happened. However, it’s estimated that it cost around the modern equivalent of $827 million USD and over 20,000 workers were employed during the project. 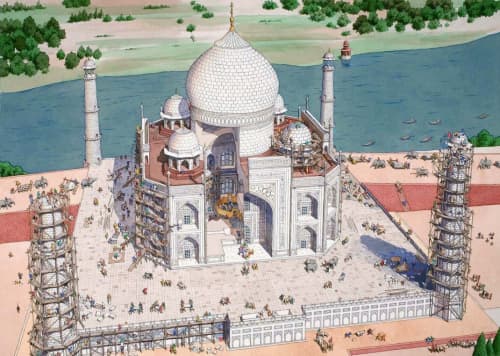 Like modern buildings, the foundation of the Taj Mahal played an important piece in the construction project. A foundation was dug and excavated out before packing it with dirt and logs to help secure the building on top. Being right near the river, the logs would remain moist and stable without sinking into the river or earth below. The foundation was packed up 50 meters above the riverbank to ensure it’s stability.

The entire project involved people from all over Central Asia and Iran. Masons, carpenters, calligraphers, painters, stone cutters and more all came from across the empire to participate in the construction. A majority of the construction costs were spent on paying these workers and securing the materials needed to build it.

While the actual mausoleum itself is built entirely of marble, much of the Taj Mahal includes a variety of materials. It’s said that over 1,000 elephants were used to carry building materials from all over Asia back to Agra for construction.

Brick, sandstone and white marble all came from areas of Agra and the surrounding areas. Jade and crystal were brought in from China, turquoise from Tibet, sapphire from Sri Lanka and jaspers and carnelians from Punjab and Arabia. These gems were used to garnish and decorate sections of the mausoleum and surrounding buildings.

After the foundation was finished, a 15k ramp made of dirt and earth was built to allow the easy transportation of materials up to the project. At the time traditional scaffolding was built out of bamboo to allow construction workers easy access to work at heights. For some reason, the scaffolding for the Taj Mahal is said to have been constructed out of stone. Maybe it was for additional stability or for the long-lasting capabilities versus bamboo that inspired them to use stone. Either way, it extended the construction time slightly because the stone scaffolding had to be built and then completely torn down at the end of the project.

A pulley system, as well as teams of mules and oxen were used to lift and move the snow-white marble and other materials. Slowly, the tomb and main building were complete.

Meant to be the centrepiece of the area, only the mausoleum was built with white marble. The many surrounding buildings and complex enclosures were built with red stone and bricks.

Most of the wonder and beauty associated with these buildings, however, are not related to the materials themselves. It refers instead to the detailed decoration and design of the Taj Mahal.

Decoration of the Taj Mahal

A majority of the work done inside and outside the buildings focused on decorations. Carved inlets were set with gems and coloured stones. Floral patterns and paintings were completed inside to decorate the tomb, guest pavilion and mosque. Painting animals or humans was forbidden in Islamic traditions so floral patterns were used often. Another workaround with this rule was the use of calligraphy. 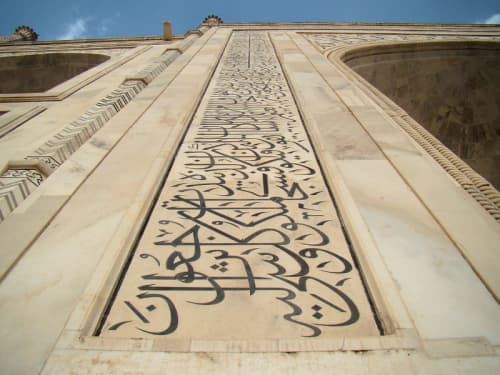 Calligraphic inscriptions and verses of the Quran can be found both inside and outside the mausoleum. The verses and inscriptions range from quotes about peaceful rest and eternal slumber to prayers to angels for mercy and love from God.

Written in Arabic and inlaid in the marble, the inscriptions don’t look like writing to the English or European eye. That being said, they undoubtedly add to the beauty of the building and are part of what makes the Taj Mahal so unique and breathtaking. 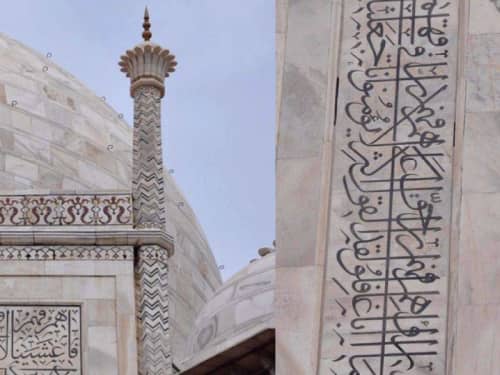 The Design of the Taj Mahal

The entire complex on which the Taj Mahal, its entrance gate, gardens and additional buildings sit is a rectangular plot of land about 1,000 ft X 1860 feet. The building is believed to have been designed by Ustad Ahmad Lahauri, although others believe it was more of a group effort. Whether it was solely Lahauri or him among other architects, the outcome was the same: a perfectly symmetrical building unlike any other in the world.

The symmetry isn’t only reflected in the building itself but in the surrounding gardens, the layout of the entire complex, the walls, positions of rooms, height and width of archways and doorways. The geometrical planning is part of what makes the Taj so beautiful. 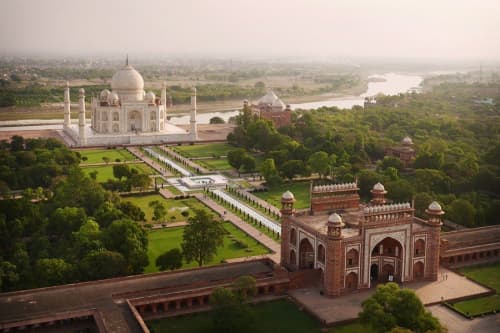 In 1983 UNESCO named the Taj Mahal a World Heritage Site, describing it as a “jewel of Muslim art in India and India’s greatest architectural achievement”.

Over 100 million people voted it in as one of the New Seven Wonders of the World in 2007. It has been named by National Geographic as one of the 50 Places of a Lifetime. To this day the Taj Mahal remains one of the most iconic symbols of love and the most beautiful mausoleum in the world.

Who knows what drives humans to build something in memory of a loved one. Whatever it is in our brains or emotions or hearts that inspire us to create in the mists of grief, the Taj Mahal is a reminder that beauty and light can be found in the darkest of times.

Up Next...
6 Minute Read
Building the Venetian Pool